Bolivia is located in the heart of South America and offers the traveler a unique, authentic travel experience.

Although it is far less visited than its more developed neighbours it is an incredible country full of beautiful scenery, wonderful culture and unmissable activities.

Here you will find some background info on this fascinating Andean nation.

If you are just looking for the tour options though you can find them here:

Many hundreds of years before the arrival of the Spanish the area of present day Bolivia was already home to great civilisations.

The ancient city of Tiwanaku (Tiahuanaco), that was founded about 400 BC and existed for about 600 years, is thought to have had as many as 50,000 habitants at its peak and its rulers commanded an empire that stretched across Bolivia and southern Peru.

Around 1000 AD the empire of Tiwanaku dismantled, the reasons why are not confirmed, and there was a period of small independent states ruled by local chiefs.

The next great civilisation to arrive was the Incas in the 15th century who conquered large parts of South America from much of Ecuador, Peru, western & southern Bolivia, areas of northern Chile and parts of northern Argentina.

The Incas are famed for their skills in road building, stone masonry and organisation and left a legacy of incredible sites. The remains of many Inca roads are evident in Bolivia including the some fantastically preserved example near the start of the Takesi trail.

One of the most important Inca sites is Isla del Sol, an island on the Bolivian side of Lake Titicaca near Copacabana, that the Incas believed to be the birth place of the Sun God.

Inca Paving on the Takesi Trail

The beginning of the fall of the Incas started when Francisco Pizzarro and his fellow Spanish conquistadors landed on South American soil in 1532.

By 1535 they had already taken the Inca capital of Cusco and set their sites on the lands further south.

With just a small army of around 160 led by Diego de Almagro and aided by the devastation amongst the native population caused by the western diseases the Spanish had brought to the continent, they quickly took control and by 1938 they founded the city of La Plata.

This new city grew quickly and was proclaimed capital of the Audencia de Charcas in 1559 and, many years later, was to become the current capital of Bolivia, Sucre.

Other cities were established across the territory that was then known as Alto Peru, such as La Paz in 1548 , but the city that was to become the most important of the era was Potosi which was founded in 1545.

It was the mountain that stood over the city of Potosi that was the reason for its growth and the discovery of what was possibly the largest deposits of silver in history within its mines.

“Cerro Rico” (Rich Mountain) as it became known, supplied seemingly endless amounts of silver for shipping back to the Spanish crown and the city that grew beside it became famous for its wealth.

By the 1600s Potosi was the largest city in South America with a population of over 150,000 people and it remained the most important city for hundreds of years.

The mining of silver and other minerals provided the financial back bone for the growth of the Spanish empire across South America.

It was only when the veins of silver that ran through Cerro Rico began to flow at a slower pace did the decline of Potosi and Alto Peru begin in the late 18th century.

Falling silver prices and calls for independence from Spain accelerated its fall from grace in the following decades. 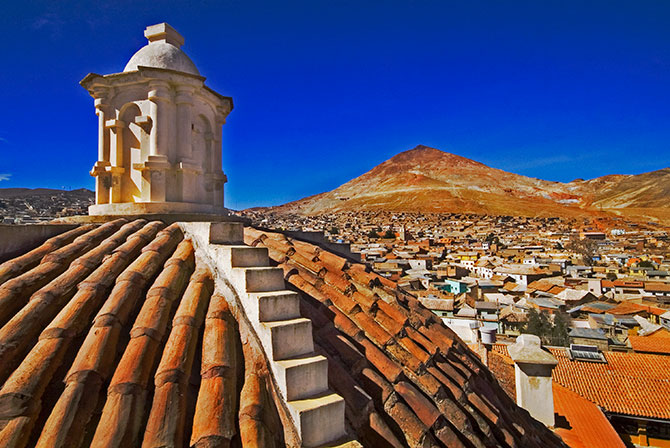 The constitutional capital of Bolivia is Sucre, which is also the Judicial capital, but La Paz is considered the 'de facto' capital and is the seat of government.

Historically the reason Sucre is the official capital is because it was originally the capital of Alto Peru , which later became the country of Bolivia,  after gaining independence from Spain.

In the early twentieth century however, it was decided to move the seat of government to La Paz due to its location being better suited and the fact that the areas close to Sucre, such as Potosi, had declined in importance.

There have been calls, such as prior to the writing of the new constitution that was ratified in 2009, to declare La Paz as the capital but this was met with fierce opposition from Sucre and other areas so the idea was abandoned.

Bolivia is split into nine departments each with its own adminsitrative capital.

Santa Cruz is the most populous city and the fasest growing although La Paz and El Alto (the city that sits on the plain directly above La Paz) combined have a greater number of people in total.

Since the implimentation of the constitution in 2009 the country has been going through the process of allowing more autonomy to each of the departments decentralising the control of certain responsibilities from the central government.

Cities have an elected Mayor (Alcalde) that has responsibility for a number of municipal services.

Bolivia has a very varied climate due to its vast size, large differences in altitude between regions resulting in a range of different ecosystems.

Additionally, the countries proximity to the equator means it does not experience 4 seasons like some countries but it is often said to have two -  rainy season and dry season.

Although you will find variations in opinion, dry season is considered to be from April or May through to September or October and the rainy season from October / November through to March / April.

Of course, weather is unpredictable and cannot be defined in exact terms but the above is a pretty good guideline as to what to expect.

Usually the heaviest rain period falls during Jan/Feb/Mar and after sustained periods of rain the country can suffer from problems such as damaged roads and, in some areas, flooding. This is also the best time to see the mirror effect on the Uyuni Salt Flats.

During the dry season, the days are often sunny and the skies clear. At night time though the temperatures are colder than other times of the year, especially in the high-altitude areas.

During July / August for example temperatures can drop below -30 degrees C in the Laguna Colorada area that is visited on the Salt Flats tours.

Large parts of eastern Bolivia are lowlands and experience a hot climate year-round with temperatures typically in the 25 to 35 degrees C range.

The northern areas of this eastern part are home to rainforests and humid semi tropical areas, whilst the central areas have more open savannas with low rolling hills resulting in a slightly humid environment with more wind.

The southern section is often very dry for many months of the year but can be prone to flooding during the rainy season.

Bolivia is home to an incredibly diverse range of people and languages.

It is also the South American country that has the largest percentage of the population being considered indigenous with over 60% belonging to one of the 36 officially recognised indigenous groups.

The two predominant groups are the Aymara and the Quechua. Around 30% of the population are considered mixed European & indigenous and are referred to as mestizo. In the south the Guarani people are the fourth largest.

Throughout the Amazon region there are various distinct ethic groups such as the Chiquitano and Tacana.

The Uru-Chipaya group are possibly the most ancient of all peoples in the region having a history of around 4000 years living in a remote area of the altiplano in between the Sajama area and Uyuni Salt Flats. Unfortunately, their existence is under threat as people leave the harsh area to live and work in the cities.

In the Yungas are there are communities of Afro-Bolivians, numbering around 30,000 in total,  that are descended from slaves that were brought by the Spanish in the 16th century.

Those visiting the Santa Cruz region will notice a number of Mennonites whose families immigrated to Bolivia around a 100 years ago and whose population is now around 30,000 spread across 25 settled communities in the area.

So whilst the official primary language of Bolivia is Spanish, in which most administration tasks are performed, there are 36 recognised official languages and even more spoken.

Travelling around the country you will likely hear Spanish, Aymara, Quechua, Guarani, Low German and various other languages as well as a multitude of others from foreign residents that have settled here with it being common to hear English, Portugese, Dutch, German and  Chinese in cities such as La Paz, Santa Cruz and Cochabamba.